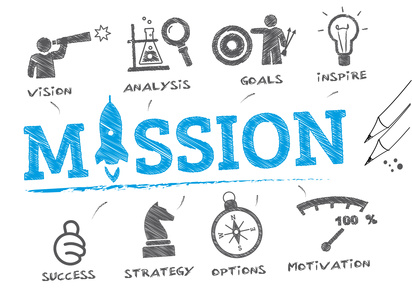 Company mission statements are essential for great organisations. I believe such organisations also require great cultures, however, this article focuses on the importance of mission.

I hate to admit it but my editor made a great point. I too had worked at similar places.

However, I have also had the benefit of working with organisations where they took their mission very seriously. Well written company mission statements, backed by supportive cultures, can inspire people, unite teams and advance your shared vision.

In a former life I was a Police Constable. One of my colleagues once wrote on our team whiteboard, “United we stand, Divided we fall”. I later learned this was a quote from US Founding Father John Dickinson. Dickinson’s quote has been repeated often since in 1768. Team work was essential for survival, among other things, during my time as a police officer.

On the day I marched and attested from the NSW Police Academy, I swore an oath to the Queen. Every officer must swear an ‘oath of office’, which is a solemn vow that the police officer will execute their duties faithfully and according to law. I considered this ‘oath of office’ as my mission and it continued to be a benchmark for me and my colleagues, during our service as police officers.

I recall one of our instructors often reminded us to walk with a sense of purpose. Most students, including myself, thought it was funny. On the day I marched out of the academy it all made sense. Everything we were trained to do at the academy, from ‘walking right’ to the way we dressed was a symbol of our professionalism and the manner in which we would carry out our mission.

Military organisations have their own mission statements. The Australian Army, for example, publishes what they call a ‘contract with Australia’. The United States Navy states their mission, “To maintain, train and equip combat-ready Naval forces capable of winning wars, deterring aggression and maintaining freedom of the seas.”

Robert Kiyosaki discussed the importance of having a sense of mission in his book, ‘Rich Dad’s Before You Quit Your Job’. He applies this to the context of his involvement as a soldier in the Vietnam war and later in business.

“In Vietnam, I witnessed firsthand a third-world nation beat the most powerful nation in the world, simply because its fighting forces had a stronger sense of mission” Kiyosaki wrote (p154).

In the context of business, Kiyosaki refers to mission as being about more than money. He refers to it as a higher calling (p156). He goes on to say, “The Marine Corps did teach me that the mission of the organisation starts at the core, in the soul of the organisation. Without integrity to a mission, an organisation does not have soul” (p157).

In his book, ‘The Art of the Start’, Guy Kawasaki says shared meaning is a strong predictor of a startup’s success. Kawasaki views most company mission statements to be long and boring but he does support the idea of ‘shared meaning’ . He suggests the use of a three or four word mantra to communicate that ‘shared meaning’ (pp12-14).

Daniel Priestley, who is a successful entrepreneur, author and coach agrees that an entrepreneur’s mission should be at the heart of their pitch. Priestley refers to your mission as your ‘Big Game’ and says it should communicate your vision for three or more years in the future.

Imagine you own one of the new wave of companies commonly being referred to as ‘the disruptors’. Disruptors operate in highly competitive environments and navigate through rapidly changing world. Some of the biggest disruptors have written mission statements despite sometimes operating in unpredictable environments.

“Founded in 2004, Facebook’s mission is to give people the power to build community and bring the world closer together. People use Facebook to stay connected with friends and family, to discover what’s going on in the world, and to share and express what matters to them”.

Did you notice their big game? Facebook’s mission is about more than keeping a few lonely geeks connected. They talk about bringing the whole world together and empowering people to build communities and express themselves. Apply this statement in today’s world and you quickly realise the wide reaching ramifications. Imagine the positive impact of enabling previously oppressed minorities to express themselves.

Google’s mission is to, “Organize the world’s information and make it universally accessible and useful”.

Did you notice Google’s big game is about more than providing a search engine? They’re talking about organising the world’s information. They’re talking about making that information universally accessible, which is an incredible challenge on its own. Bringing ‘the world’s’ information to everyone would be an enormous challenge. Consider third world countries, people without computers, people with disabilities, citizens of dictatorships and so on.

Tesla’s mission is, “To accelerate the advent of sustainable transport by bringing compelling mass market electric cars to market as soon as possible”.

Tesla obviously has enormous challenges ahead. Sustainable transport will need to go beyond the use of renewable fuel. Imagine the challenge of sourcing renewable, recyclable or biodegradable materials suitable for making cars. Car owners will need access charging stations when they’re away from home, which is a challenge in itself.

Write your own company mission statement and use it as a guide for everything you do. Your mission should inspire you and your team, unite your efforts and drive you forward. Remember the words of Robert Kiyosaki; “Without integrity to a mission, an organisation does not have soul”.